New Bat House (up on the bat-pole) 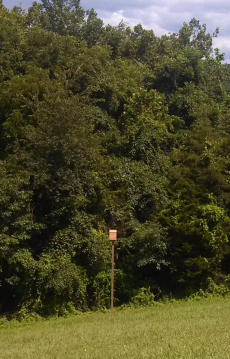 Bats make up almost a quarter of all mammals, and they are the only mammals able to fly. They can be found all throughout the world, and although they may not be the cutest creatures in the animal kingdom, bats are extremely helpful to humans in many ways.

Many movies, television shows, and books have given bats a bad name. When many people hear the word "bat," they think of blood-thirsty creatures who spread diseases like rabies.

The truth is that there are only three species of bats that feed on blood, and they all live in Central and South America. According to Bat Conservation International, fewer than 10 people in the past 50 years have contracted rabies from a North American bat. People also fear that they will be attacked if they are outdoors at night when bats are present. This is a misunderstanding of bat behavior. Bats swoop down to catch flying insects, not to scare you.

Bat droppings, called guano, are also beneficial. Guano is nitrogen-rich and is considered an excellent fertilizer. Some scientists have even found particular enzymes from bacteria in guano that can be used as cleaning agents in laundry soaps and other cleaners.

70% of the more than 1,000 bat species are insectivores, meaning they feed solely on insects. Some insectivorous bats can catch up to 600+ mosquitoes an hour! In Austin, Texas there is a bat colony, estimated to have up to 1.5 million bats during peak season, that has been estimated to eat almost 10,000-30,000 pounds of insects. Take a cue from the folks in Europe who have been using bat houses to eliminate mosquitoes since the early 1900s. Most bat houses, when placed properly, will be occupied within one year of placement. Think of how many more BBQs and bonfires you'll be able to enjoy.

Don't let bat myths play on your fears. Bats are friendly, helpful creatures. When you place a bat house in your backyard, you offer bats a safe place to live. They'll help eat pesky mosquitoes, and you'll be able to spend time enjoying the outdoors during the warmer months.